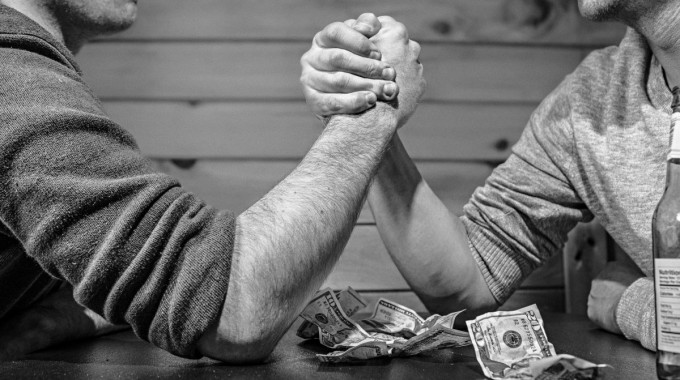 I’m pretty sure that what I wrote about in Part 3 of this blog series only exposes the tip of this iceberg of B2B sales process complication. As more and more silver bullets were pushed by technology vendors and methodology consultants, results became less and less predictable. Then it got worse.

For example, a heated debate erupted over “outbound vs. inbound.” Of course, as with all such heated debates, the most important part was to establish defensible turf for B2B marketing and sales consultants. Verbal fights, complete with name calling, erupted over the mere definitions of terms. Inbound? Outbound? Allbound? Bound for glory? Statistics that definitively proved the superiority of inbound over outbound were countered with statistics that definitively proved the other guy was an idiot, and a self-serving idiot at that. Camps were formed, and battle lines were drawn, at least among the pundits and consultants.

Meanwhile, CEOs, CFOs, investors, and revenue executives got pretty confused. How could all these seemingly smart people have such divergent opinions about how to go about something as old as selling products and services to other businesses? Here was Sales, a function that was so well understood, and whose execution details were so irrelevant to the strategy of any business that for more than a century it was lumped in with “General and Administrative” expenses to be SG&A. Sales was what was done by salespeople, wasn’t it? Don’t we just have to hire a good VP Sales, figure out our bookings goal, and say “Go get it!”?

Suddenly, what used to be a simple “numbers game” played by seasoned, and fortunately interchangeable, veterans became a very complicated mess, with contradictory advice offered from all sides. What was Marketing responsible for? What was Sales responsible for? Why is everyone saying they need to be “aligned,” whatever that means?

If this was a little confusing for established businesses, at least they had a customer base to fall back on. For freshly funded companies fielding revolutionary products, the world went a little crazy. Recognizing that someone needed to eventually talk to a buyer, these companies set up two-tiered sales models, hiring Lead Development Representatives (LDRs) to try to talk to inbound Marketing Qualified Leads (MQLs), often referred to as “hand-raisers;” and hiring Business Development Representatives (BDRs) to call, email, stalk, and otherwise try to get conversations with those pesky non–hand-raisers.

Alphabet soup thickened, and more terminology disputes broke out among the pundits. But the idea persisted that Sales itself needed to be divided into specialized functions based on the difficulty of the task (inbounds are “easy;” outbounds are “hard”) and the rhythms of the job (inbounds mostly need to be called; outbounds might need lots of list creation and management, research of companies and individuals, and multiple text and verbal ways of “touching” a prospective buyer).

To add to all this complication, one more inevitable factor showed up: who were all these new kinds of salespeople going to report to? Some said Sales; after all, aren’t they just doing specialized parts of what salespeople have always done? Some said Marketing; after all, aren’t they really just generating a more qualified lead? And aren’t qualified leads the very thing Marketing is supposed to manufacture as raw material for Sales?

I’m sure it doesn’t take much imagination to see where this led. When big changes to how budgets and headcount are in play, politics will soon rule. The old rule, that Marketing has dollars to spend on programs and that Sales has “heads” to allocate to quota, faded away. Marketing sometimes got a bunch of heads and had to learn how to do sales management. And, being Marketing, that bunch of heads often came with a fair amount of propaganda horsepower to tell the story about how great it was all working. “All” being the part that Marketing was doing: generating MQLs and, increasingly, SQLs. (Yes, the “S” stands for Sales.)

A Game of Thrones

To be fair, in the world of B2B, Sales has always disdained Marketing’s leads. If Marketing provided some advertising air cover, brochures that didn’t suck too badly, and some events that attracted some decent leads, that was enough. Sales reps could always make fun of not only Marketing, but everyone back at headquarters who just didn’t understand what really happens out on the front lines. However, as soon as Marketing’s bonuses depended on Sales formally accepting their MQLs and SQLs and converting them into Sales Accepted Leads (SALs, of course. The alphabet soup needed more thickening!), fingers needed to be pointed.

An entire Sales and Marketing Alignment industry appeared on the scene to give senior leaders a hope of sleeping at night. And, of course, camps appeared, and pitched battles were, and are, fought over quantity vs. quality and whether the leads suck or the reps are lazy, with no sign yet that the Sales and Marketing Alignment program of the day is going to bring peace.

Stuck in the Middle with You

To go back to my central thesis in Part 1 of this blog series, I believe the root cause of all this complication, confusion, waste, and angst is one thing: the death of the telephone as a B2B sales tool, killed by ubiquitous voicemail in a disaster worse than Y2K.

But, you reasonably ask, isn’t it really the fault of the internet and all its spawn: websites, search engines, blogs and bloggers, and the new kid (already looking a little grizzled), social networks for business? Didn’t these factors create a world where the buyer is on his own, and content is king? The telephone may have gasped its last breath, but so what? The buyer has already fired up his browser and loaded up his mobile apps to head out on a journey that just has no place for the seller until that buyer’s mind is pretty much made up.

As sellers, what can we do? We are stuck waiting for the buyer to appear on the scene as a visitor to our site or to reveal himself by a careless tweet or post. And even if it’s a little complicated, won’t our highly differentiated content full of actionable insights let us establish thought leadership, eventually bringing him to us as a hand-raiser, ready to buy?

In Part 5 of this series, I’ll give you two arguments to dissuade you from that “the internet made us do it” position.