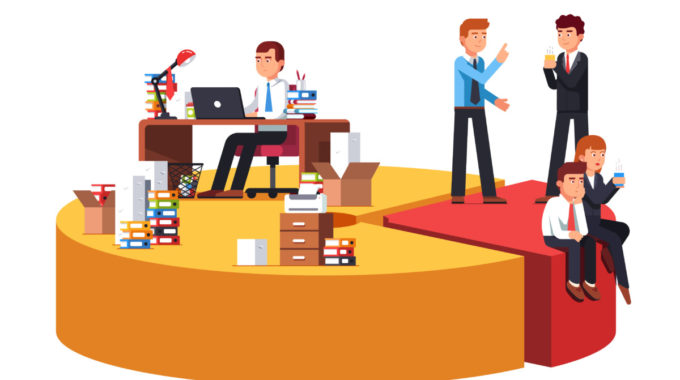 While there is variety in the business-to-consumer world, it is nothing compared to B2B. The reason is that there are only so many kinds of human consumers (I’ll leave our cats, dogs, pigs, and weasels out of this one!) constrained by biology, culture, and circumstance — but there is no limit whatsoever to the problems that plague the businesses serving those consumers. I suspect there is some mathematical theorem to be written in the margin of this article someday — but we’ll leave that for future generations to discover. For the moment, I’m going to simply claim that there are lots more “species” of B2B companies than there are B2C or any of the other “B2X” variants.

Why do I bring this up? Because it would seem that given how many species of B2B businesses there are, with more growing every day, they would have very little in common. After all, that’s why there are so many in the first place! B2B businesses mostly serve other B2B businesses, in much the same way the fleas in this poem* mostly bite other fleas.

So, we would be forgiven for guessing that each kind of B2B business, and certainly each individual B2B business, would have a different constraint on its growth.

This is important, because “growth” and “survival” are very highly correlated. As a third-generation CEO of a risk management company said to me recently:

“By the very nature of our business, we lose 10% of our customers every year, because they get acquired or go out of business. If we aren’t growing at least 11% per year, we are joining them.”

And growth, especially organic growth (the kind driven by selling your products and services rather than buying your competitors’ or neighbors’) is challenging. It has many elements. They need to be brought together in a workable sequence. It costs money but must cost less than the gross profit to be delivered by what you sell. It depends on talent, which makes it a lot more like managing a sports team than a factory. There are many fateful choices to be made, mostly in deciding which few of the many species of companies to focus your sales efforts on — because, annoyingly, every buying animal in the B2B menagerie only wants to “eat” what someone “just like me” has been eating.

Heavy is the head…

Businesses themselves exist to manage variety by reducing a complicated bunch of inputs into some simple output type called a “product” or a “service.” And yet it seems like the selling of these products and services stubbornly brings more variety to manage, at least in B2B. It’s werewolves and vampires and zombies and more, all the way down, and not a silver bullet in sight.

So, we punt. We simplify sales by hiring someone to run the growth engine, effectively outsourcing this whole mess to a guy or gal with a track record (which we pray is not due to being lucky with a hot product in a hot category at the right moment — because we’re pretty sure that lightning isn’t going to strike again). Then we negotiate a bookings or revenue number, and a budget — oddly, in the currency of headcount, not dollars — with this individual. The “number,” for a number of reasons, (one or two of them not insane), is for exactly 1 (one) year of results, even though there aren’t very many things a “Head of Sales” is going to do that take 1 (one) year to accomplish. (It’s not a job like “Build a road that goes from Phoenix to Flagstaff” that needs a project plan: it’s more like “Do that stuff you sales guys do, and we’ll keep staring at the speedometer to see how you’re doing. And if it seems too slow, we’ll yell at you to go faster.”)

And if “Sales” (the proper noun for the name of the department, thus the capital S) comes up short of the number, we change the one thing we know how to change — the Head of Sales.

One thing to note: this way of running “growth” has built-in conflict. The Head of Sales (or, too frequently, the brand-new Head of Sales) has a strong incentive to negotiate the lowest possible number. Given that neither the business, nor the Head of Sales, can actually calculate how much can be sold, the stronger the Head of Sales, the lower the number. That is, if I’m “Johnny Credible” with a big swinging track record, and I say, “Sorry, guys, $87 million is a stretch, and that’s only if I can grow headcount by 23%,” it doesn’t really matter if the company could really do $93 million with current resources. The company’s only choice, once the usual November tug-of-war has finally worn out both sides, is to go with it. And Johnny Credible? Well, one thing for sure — he’s not going to accidentally hit $93 million after saying $87 million. Maybe $90 million — and making sure to hire every allocated head. Because the whole dance starts again every November, and Johnny Credible didn’t get to be so credible by being dumb enough to blow out a number and his credibility with it.

Now, here’s the odd part. It turns out there is one, and only one, constraint on the growth of almost every B2B business. And it’s not Sales headcount, which the standard model supposes. In the standard model, we pour Sales heads into the planning mix and pretend each one will produce some fudged percentage of their allocated quota. Then, we add it all up and — voilà! — a bookings plan! If Sales heads were the constraint on growth, this approach would work perfectly, and companies would rarely miss their number and take a step on that all-too-common journey to oblivion.

We all know, by the way, that our growth can’t really be Sales headcount, because at the same time we are blithely planning on turning quota assignments into future bookings, we accept — correctly — that 80% of the real output is going to come from 20% of our Sales performers. Those two notions are mathematically incompatible. And the 80/20 one acts like a law of nature, which we ignore at our peril. Maybe that’s why these top sales-management jobs are so perilous. Fighting Mother Nature is a bitch, especially when she brings out the heavy mathematical guns.

So, the constraint on B2B turns out not to be Sales headcount. But maybe it’s somewhere else, and we can attack that constraint in an enlightened way. Maybe we can even do so during the sales year. After all, one of the benefits of being wrong in our assumptions could be that our “lock and load” assumption — that a full year is the right duration for planning, design, and action — is wrong. What if the constraint turns out to be somewhere that can be addressed in a quarter, or even a month?

At least the answer to this question is obvious. We would immediately run and experiment to validate this crazy hypothesis. And, if it proved true, we would implement this constraint-buster very carefully, recognizing that our original model — the one that says the Sales department’s headcount is the constraint — is dead wrong. And that Nature’s Law (the 80/20 rule) ain’t going anywhere soon.

In Part 2, I’ll reveal the constraint and make a simple argument: companies that “get it” and shift from the headcount model to an approach that addresses their real constraint will change their business neighborhood quickly in a surprising way. They will eliminate their competitors and be left with only friendly partners as company.

* Poem attributed to Ogden Nash, who perhaps borrowed the topic and similar phrasing from a 1733 poem by Jonathan Swift.

Link to Part 2 of this two-part blog series.