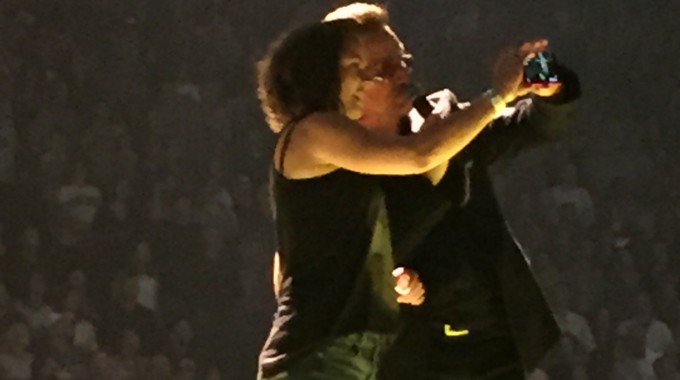 On June 6th and June 7th, it was a privilege to attend U2’s Innocence to Experience tour 2015!

Mike O’Neil, an avid rock show attendee made sure to share his best practice

1) Wear a shirt that is recent and relevant to the audience.  In Mike’s case, he wore a Rolling Stones shirt that he picked up on Wednesday at the Stones concert in Minneapolis, MN.  It caused a lot of folks to interact with Mike, and make some new friends!

2) It’s a matter of PERSPECTIVE!  The second thing he shared – is to MOVE AROUND.  On June 6th, I was stationary in my seat in section 144, Row 19, Seat 25 and 26 with my wife.  It was good to see the show from the “30,000 foot view”.  On night 2, knowing where all the action would be, I was able to move around (with General Admission Seats), BEFORE the rest of the audience did, because I knew where they would be playing next.

The TAKEAWAY for Sales Professionals – GET PERSPECTIVE!  The picture above is with Bono and someone from the audience who broadcast past of the concert over the internet!  How cool is that.  Apps like www.periscope.com are changing people’s perspective.

How does this relate to selling?  Triangulate.  Talk to multiple department heads in your accounts, get a good picture of the lay of the land.  Especially in bigger accounts, enterprise selling, knowing the various players, and getting a perspective on the account is important.