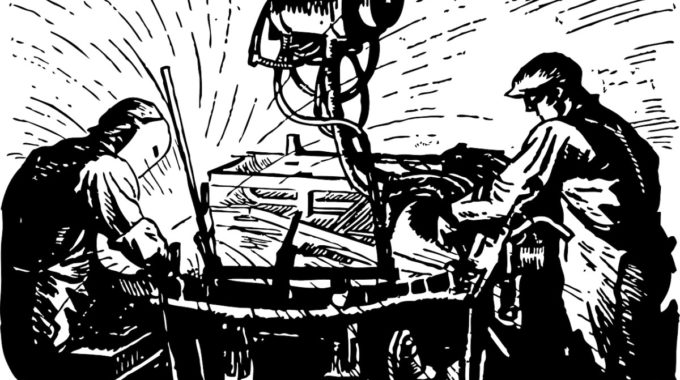 Given that physical dictionaries are by definition out of date, I tried Dictionary.com, which defined “industrialization” as:

“the large-scale introduction of manufacturing, advanced technical enterprises, and other productive economic activity into an area, society, country, etc.”

So, what the heck have I been talking about? Clearly, something slightly different — more like “the introduction of repeatable processes executed by humans and technology working together in pre-defined ways that consume information and produce completed sales transactions.”

By this definition, sales automation is different from sales industrialization. There’s been plenty of automation available for salespeople to use, and B2C sales have been fully automated in many cases. Just buy yourself a half-dozen of those fabulous Domitalia bar stools at Amazon. All clicks, and no talking with salespeople. “See!” say the experts, “B2B will follow B2C, like light follows the sunrise. Prepare for millions of sales jobs to evaporate as the e-commerce sun rises higher and higher!”

There’s lots of automation, indeed, but is B2B sales industrialized? My test is to ask, do we know how to make a B2B sales “factory,” a system that brings together automation, people, and information in a way that pumps out “sales units” in the same way that a normal factory makes, for example, bottles of kombucha, or Domitalia Bouchon 25.25” Counter Stools in Rust, or that Chevy Bolt I’ve been thinking about? Do we know what goes into manufacturing a “sale”? What are the raw materials? Through what steps should we process them? With what kind of tools and equipment? Through what shaping, molding, and assembly processes? With what anticipated yields?

Some say, “Yes, it’s already been done,” specifically by Salesforce.com, documented by Aaron Ross’ groundbreaking Predictable Revenue way back in 2011. Role specialization is the key to breaking down the sales process — especially the top of the funnel part — into discrete activities organized into sequences, each one of which feeds the next until a finished transaction pops out the other end. Ideas like Aaron’s usually take a long time to catch on, but the roaring success of his exemplar, Salesforce.com, and the fast-adopting culture of Silicon Valley (where firestorms of best practices and, occasionally, fads are fueled by billions of venture capital dollars seeking 10x returns) made this idea take root in a hurry.

To find a team of Sales Development Reps (SDRs) feeding, fronting, paired with, or otherwise working with Account Executive deal-closers (AEs) was unusual 10 years ago. Not anymore. SDRs are in such high demand that some funded startups offer six-figure packages combined with a possible fast track to the job they really want: Account Executive. As one somewhat grizzled veteran of many B2B startups told me recently, “I’m hiring 23-year-olds to set meetings for 24-year-olds.”

So, maybe B2B sales has been industrialized, at least in the early-adopting universe of massively funded startups. But if it has, then that industrialization doesn’t appear to have much effect.

As far as I can tell, B2B startups still fail at the same frisky rate they always have. This could, of course, mean that sales doesn’t matter, and therefore, even if most funded B2B startups are amazing examples of industrialized, predictable revenue, that industrialization has had no impact on their survival rates. If revenue has become so predictable, why hasn’t survival become predictable — and controllable — as well? Why do most funded B2B startups fail if they can generate revenue at will through a prescribed, easy-to-execute industrial process?

There are two possible answers:

So, I’m going to make a bold conclusion: B2B sales has not yet been industrialized, because if it had been, the streets of Silicon Valley would be paved with gold rather than the corpses of dead startups.