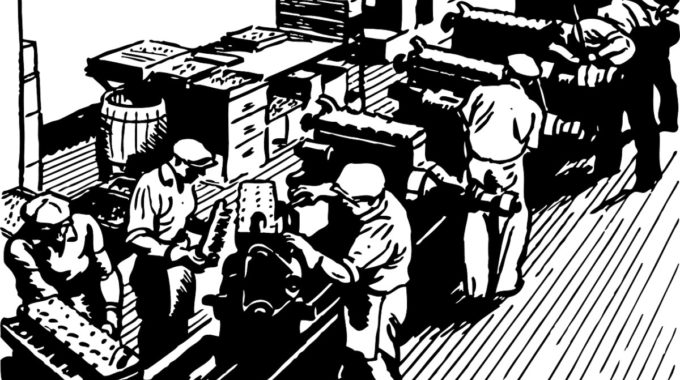 In Part 1 of this series, I disposed of the idea that B2B sales has already been industrialized by the widespread adoption of the sales development model. Let’s suspend the question of whether B2B sales can be industrialized and ask, “What would industrialized B2B sales look like?”

Industrialized sales would, at the least, make use of some kind of available inputs to its manufacturing process and would subject those inputs to a repeatable process to produce some kind of standardized output as the first step in a process that might ultimately produce a sales transaction as its final output. Why do I say “might” rather than an unqualified “produces”? Because it is not necessarily the case that a given unit of input will produce a unit of output every time.

In fact, in all manufacturing processes — not just the whole process, but every step — there is a characteristic yield. And that yield is rarely 100%. For some industrial processes (mining comes to mind), variability in inputs drives variability in outputs. In others, such as semiconductor manufacturing, the machines that transform inputs into outputs change internally over time as impurities accumulate or even as dimensions change as a side-effect of operations. Even something as seemingly straightforward as mowing the greens on a golf course will vary as the mower blades dull and vibration alters the mechanical settings. In other industrial processes, such as growing crops at scale, yields vary not only because of variations in input, such as available water, sunshine, and temperature, but because the process has negative and positive feedback loops that drive yields both up and down simultaneously.

Getting out what you put in

So, perfect predictability is not a prerequisite for industrialization. All that is needed is a reasonably well-understood correlation relating inputs — process execution resources (machines, people, time) and process execution (sequences of steps) — to the quantity and quality of desired outputs.

In traditional sales, the inputs are not very “industrial” at all: they consist of little more than a sales rep, a territory, some product information and product experts on tap, and time. The rep is the machine, the territory is the raw material to be processed, and the product information and experts are extensions of the machine — tools added to the rep by the rep (very unusual for a machine to modify itself based on its own judgment of its own immediate inadequacy!). The output is deals sold and dollars made. The rep’s quota is related, more or less, to an estimate of what the machine can do with the inputs over a given period of time, arbitrarily a year, which is itself a strong clue that traditional sales is not “industrial,” as we don’t find very many factories that wait until one year has gone by to see what they produce; daily production targets are much more common, for good reason.

So, while sales as a whole might be a candidate for industrialization (and very sound “whole company” systems for accomplishing this goal have been described and even prescribed by Justin Roff-Marsh in The Machine and Donald Scherer in Assembly Required), it might be useful to ask whether sales, or some useful part of sales, can be industrialized without having to change the entire company. Most of us who have been around enough businesses know that changing everything, while often necessary to achieve significant improvement, is very tough. Scherer somewhat restricts the prescription of Assembly Required to potential category kings, or “gorillas,” so getting the whole company right from scratch feels like a reasonable proposition. Roff-Marsh targets, as far as I can tell, existing companies, often in more traditional lines of business, and he concludes that you better be ready to change much of how the business works to make an industrial sales machine.

Interestingly, the trend in venture-financed tech companies is in the opposite direction from industrialization. The “sales development revolution” was supposed to provide the twin benefits of efficiency (through specialization of top-of-the-funnel sales work) and a solution to the chronic problem of scaling a sales organization — by providing a training ground for future account executives. The odd result has been that sales development jobs are generally jack-of-all-trades craft positions, in which very inexperienced new hires are given responsibility for interpreting ideal customer profiles, researching prospects, compiling lists, designing and executing a social selling strategy (based on developing themselves as trusted guides!), drafting and sending prospecting emails and social messages, devising scripts (if they feel a script is needed), making phone calls (if they feel those “make sense” and are comfortable to make), and setting appointments for demos or discovery calls. All the while, they are really expected to develop themselves as future account executives, although how to do so often isn’t clear and is rarely anything resembling an industrial process.

For all of the above reasons, plus one more, I have not until recently been much of a fan of the current sales development movement as a step in the direction of industrializing sales. And when a head of sales development at a well-known, massively-funded Silicon Valley unicorn (at the time) told me that his job was not to produce a certain quantity of meetings above a certain threshold, but instead to “hire and onboard 300 sales development reps,” my reservations about the sales development movement went beyond mere skepticism. Clearly, if we only care about assembling the machines under one roof and have no credible plan for organizing those machines into a process that converts inputs (suspects or leads, depending) into outputs (quality meetings on the calendar), there isn’t much hope for achieving industrialization.

Let’s take it from the top

Over the past couple of years, and particularly during the past 12 months, I have changed my mind. I now believe that, for most companies, there is a straightforward way to quickly industrialize the bottleneck of most B2B businesses — securing meetings with qualified prospects.

So, in Part 3, let’s look at the top of the sales funnel as a candidate for partial, but meaningful, sales industrialization — without having to change the whole company, or even too many things about the rest of the sales organization and process. I have two reasons for this choice: