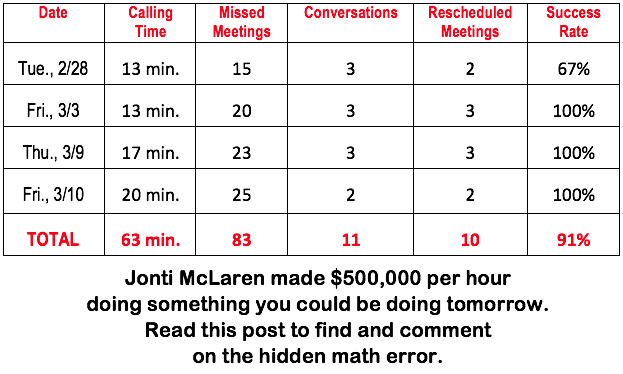 In reviewing my Life at 1,000 Dials a Day series, I was struck by just how negative it was, and amazed that anyone would hang in there while we explored questions like “Will 1,000 dials a day chew up my lists?” and “Do reps burn out from having too many sales conversations?”

In retrospect, maybe I should have started each article with the theme song from the must-watch Netflix show, A Series of Unfortunate Events, repeating the single line “Look away, look away” as fair warning. Of course, each article ended with an assurance that, no, it’s really not all that awful. In fact, Life at 1,000 Dials a Day is vigorous, but downright pleasant; it’s fun, and profitable, to do all that talking to prospects, setting meetings, covering inbounds with conversations, gathering business intelligence, and embracing the joyful noise of a lively sales floor.

Why was I being so defensive? I’ll admit it: it’s the legacy of listening to the many forms of “That sounds too good to be true” when first describing ConnectAndSell to an innocent stranger. Perhaps a poor excuse for a 13-article series, but it’s all I’ve got.

See you on the flip side!

So, let’s start to explore the flip side. Obviously, at 1,000 dials a day it’s easy to get a conversation with someone on your list. Just push a button, wait a bit, and — voilà! (or “Uber!”— if it’s still safe to talk about those guys) — you are in a conversation. And they say there’s no Easy Button in sales…

In this series, we’ll explore that Easy Button and ask, “What else can you do at 1,000 dials a day?” Warning: this may have more than 13 parts, and I’m afraid I haven’t made the whole list, which I suspect goes on and on. So let’s try just one.

How about blown meetings — when a prospect, especially a high-potential prospect, doesn’t show for a scheduled meeting. If this has never happened to you… What am I talking about? It’s happened to all of us!

And what do we do about it? Cursing is popular. A little phone-slamming maybe? The only positive is that you now have something — admittedly a bit shopworn — to bitch about to anyone who cares to listen. And, just like a golfer or a politician, you have a blessed excuse for your failure to get it done today, and excuses are the universal currency traded for sympathy and, we hope, a little forgiveness from our bosses, peers, and families.

But how about looking at a blown meeting as your biggest business opportunity? Yes, I said “biggest.” Bigger than sitting next to your dream prospect on a cross-country flight! Bigger than beating your fiercest competitor for the deal of the decade on the last day of the year! Bigger than blowing by your annual number by Halloween?

Wow! Those are really big! How could blown meetings be bigger than those big wins?

Because those exciting items above happen once. Blown meetings happen every day, whether you are enjoying Life at 1,000 Dials a Day or ambling along enjoying the modern pleasures of a silent sales floor: there are meetings, and meetings will be missed. Missed meetings are right up there with death and taxes. You can rely on them!

Okay, I hear you saying, “Blown meetings are certainly reliable, but to constitute my biggest business opportunity, wouldn’t they have to be valuable rather than just an annoying cost? We make money around here by having meetings, not by missing them. Right?”

Trying to make a difference

Perhaps some math is in order. Increasing the show rate for your meetings can have more impact on your business — as a sales rep, manager, executive, or business owner — than any other single factor, because you start from such a low base. If your show rate is 70%, improving it to 85% will grow bookings about 20% faster. If your show rate is a more typical 60% (let’s be honest here), then getting it up to 85% adds 25% to your bookings rate.

The rest of the math is even more compelling. The typical move when we want to grow revenue is to hire another sales rep. That rep takes 5.3 months to onboard and ramp, months more to build their pipeline, and, with luck, is producing real results by the end of Year One. And the numbers are even worse, given that 35% of these slow-onboarders end up gone before two years are gone, after much wailing, gnashing of teeth, and a dreaded performance plan or three. I know you know these numbers, but just in case, here’s a pristine Bridge Group study that gives me chills every time I read it.

The point is, our standard response to the need to grow revenue is to hire and hope that eventually the needle will move. This is the root cause of the most debilitating disease among sales managers: obsessive spreadsheet disorder. In other words, hoping that one more pivot table will show those promising green shoots that mean you get to keep your job a bit longer while that last round of hires hits their stride.

Here’s how to move the needle instantly, exploiting Life at 1,000 Dials a Day without even having to convert any email-obsessed sales weasels on your team into hungry sales pigs feasting on 40+ conversations per day.

“Wait!” I hear you saying. “Can’t I just send them an email they will probably ignore, and call them once or twice until I decide they just aren’t interested?”

Sounds good, until you consider the following, perhaps the most ironclad, and wishfully ignored, law of business:

The Reach Paradox
Your best prospects are the hardest to reach.

Why? Because they are in demand. They are legitimately busy. They don’t know enough about you and what you offer to prioritize meeting you. Things come up that are (gasp!) more important to them than meeting with you. Sending an email might cause them to do a bunch more calendar work with you — but it might not.

So, not only are you leaving meetings on the table, you are leaving a disproportionate amount of revenue on the table — and perhaps justifying it by being offended.

Jonti McLaren instituted this simple 3-step rescheduling practice and can teach you all about it. Jonti is a guy that I would probably want to meet with.

Note his monster track record of starting and exiting companies!

Admire his Senior Vice President of Sales and Marketing title.

You don’t even have to consider that he personally sells millions of dollars of revolutionary (that means “hard to sell because it is different and makes a difference”) sales tech.

Would you flake on this guy? No-show on this show pony? I wouldn’t have the effrontery myself.

And yet it happens…

Like everyone in sales, Jonti occasionally has a no-show for a meeting that he has set. When this happens, he uses a simple status dropdown in Salesforce to flick that prospect into a focused “Missed Calls” list (aka “Missed Meetings” list). It takes him less than 30 seconds.

Jonti is a VERY busy guy and had only a handful little 15- to 30-minute gaps that he could utilize to load and call his Missed Calls list. Check out the success he had in using these short periods of time to reschedule some missed meetings:

*** “It is clear that when you get them on the phone, and they hear it is the actual person (and one with some presence), they are quick to apologize and work to set a meeting.”

The dollars-and-cents analysis is even more striking: about 40% of Jonti’s meetings convert to a ConnectAndSell test drive, and 50% of test drives convert to a 90-day pilot that averages $31K and has an LTV of more than $250K. So these 10 rescheduled meetings are worth, in anticipated future closed/won business, about $500K, with an average sales cycle of about 60 days, end to end.

Got it? Jonti moved the needle for our company by roughly $500K by investing about 1 hour of his time. Total. Really. For you business math buffs out there, that’s $500,000 per hour of return on the investment in Jonti’s rather modest salary, benefits, and stock options — which is even more than one might surmise just by gazing at his lovely LinkedIn profile!

Every one of your reps has blown meetings. It doesn’t matter whether they set the meeting themselves or had it handed to them by an SDR. No-shows are the always-show of business. They never fail us, rain or shine.

Your reps could be turning your no-shows into money with zero effort, and zero incremental time investment (unless you have miracle reps who never have a gap in their calendars. Oh, wait! They could use the time from those no-shows!!!). Maybe your dollars-and-cents numbers aren’t quite as big as ours — our product has unusually high revenue density — but at 1/10 the economic results, this technique can still harvest $50,000 per hour of rep time.

Of course, you could blow it by deciding that rescheduling is an activity that is beneath the dignity of your top sellers. I see this one a lot, where if the salmon is not placed directly in the mouth of the great grizzly, said grizzly feels demeaned. It’s the hazard of living in a “concierge nation,” where the ever-expanding rule is “If it’s worth doing, it’s worth having someone do it for me!”

In this case, it’s not. The key elements are:

That’s it. It works on dormant leads too; you know, those thousands of people who expressed interest through your website, but no one has talked to yet (and probably never will). Not quite as rich a result, but it’s true that $50K per hour is not necessary to at least check it out.

Now here’s the bizarre part. This power — this $50K-per-hour machine or whatever it turns out to be for you — can be tested, in full production, for FREE.

This is where I start to feel a little foolish. Why would I let you call Jonti McLaren on his cell at 415-265-2121 or email him at jonti.mclaren@connectandsell.com just so you can find out if you qualify for a free 4-Hour Intensive Test Drive of something with this much potential value? Value you don’t even need to adopt our product to use for actual selling in order for you to reap? Value that can be delivered during the test drive itself, by the simple expedient of gathering your Missed Calls, no-shows, blown meetings, whatever-you-call-them into a list and making it grist for our mill?

Why indeed? Here’s why. Because I’ve learned something the hard way here at ConnectAndSell: something that is “too good to; be true” — regardless of the fact that it has been adopted as the secret (and sometimes not-so-secret) weapon of many of the world’s most powerful B2B companies — needs to be experienced to be believed. And anyway, Jonti’s numbers aren’t your numbers, and you deserve to have your numbers, and the evidence of your eyes and ears, before trying something as unnervingly fast as ConnectAndSell Lightning™.

Don’t take my word for it. Call Jonti. He’ll tell you.