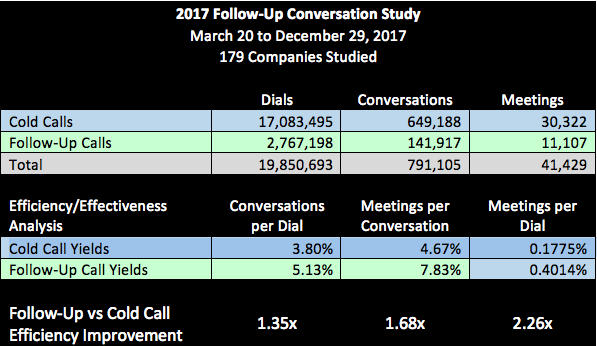 The hypothesis of this study was that both calling efficiency and appointment-setting effectiveness are independently superior to cold calling.

The study examined the results of 19,850,693 dial attempts that resulted in 791,105 conversations and generated a total of 41,429 scheduled meetings. The results of each conversation were recorded by the ConnectAndSell system based on a forced drop-down list selection made by the sales rep at the conclusion of each conversation. The study data did not include either the attendance statistics for those scheduled meetings nor any results from those meetings that were held.

The table above shows the results for each of the campaign types.

Follow-up call attempts comprised 13.94% of all dial attempts, produced 17.94% of all conversations, and generated 26.81% of all meetings.

The root cause of this improvement in dialing efficiency was due to a straightforward selection effect: the follow-up set of prospects consisted entirely of individuals for whom the caller had validated phone contact data and those who had demonstrated by past behavior that they answer phone calls, at least on occasion. That is, these follow-up calling lists effectively excluded all bad contact data and further excluded those prospects who don’t ever answer their phone.

Because these two effects — dialing efficiency and conversation effectiveness — are independent, the overall improvement in output per dial attempt is 126% (2.26 times)..

Calling follow-up prospects, defined as those prospects with whom one has had at least one conversation, is 2.26 times as productive per dial compared with calling cold prospects to have first conversations.

One way of looking at this effect is to calculate how many additional scheduled meetings this study group of 179 companies would produced over the same period using the same amount of effort had their dial attempts been spread equally over cold and follow-up attempts. In this scenario, 9,925,347 follow-up dials, by themselves, would have resulted in a total of 39,839 meetings, which is 96% as many meetings as the 41,429 meetings that were produced by the mix of dials actually executed. These meetings from follow-up dials would have been in addition to the 17,866 meetings produced from cold dial attempts to yield a total of 57,705 meetings — an increase of 16,276 meetings, or 39%, compared to the results measured from the cold-to-follow-up mix found across the study data.

In other words, by simply shifting the mix of cold calls to follow-up calls from 86/14 to 50/50 — a zero-cost change that can be made by a simple choice of which lists to make dials from — companies can achieve the equivalent output of hiring, onboarding, training, and ramping almost four additional reps per every 10 reps currently on their team.

This study shows that to get these remarkable results doesn’t require any investment in new sales technologies, training, a bigger team, coaches, or sales process improvement. They are simply the result of systematically creating and calling follow-up opportunities, which can be accomplished by disciplined management of an optimized mix of calling lists that include at least 50% follow-up calls.

To summarize, the return on investment of increasing the percentage of follow-up calls in the overall calling mix is effectively infinite. A zero-dollar investment to optimize calling-mix yields immediate, significant, and measurable returns in the form of more scheduled meetings with arguably better-qualified prospects who have had more opportunities to consider taking a meeting before doing so.

These results illuminate a simple path to immediate sales productivity improvement and should be considered carefully by every B2B sales manager.